Teaching Poetry and Literature in Prison 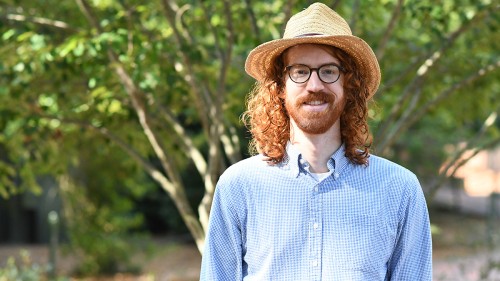 Theodore Nollert, a Ph.D. candidate in the Department of English and Comparative Literature, has taught American poetry and literature to an unexpected audience who has discovered unexpected connections in ages-old written works. He has traveled to Granville Correctional Institution dozens of times this year to teach a course to inmates.

“Through literature, people discover differences and similarities to the past. You’re trying to get them to pay attention to what’s there. I think that’s a useful skill in life.”

Nollert, who learned about the teaching opportunity through faculty Abigail Lee, will teach his final class at the correctional institution on Sept. 21. The course is part of the Correctional Education Program, an initiative of the Friday Center for Continuing Education.

While teaching, Nollert has encouraged his students to read and reflect on a range of genres, from American poetry to Shakespeare. Recently, his students read “Hamlet.”

“They couldn’t believe that people had ideas that resonated with them more than 400 years ago. The kinds of human concerns we find in literature are timeless and remain surprising,” Nollert said. “The students who show up are really hungry to learn,” he said. “The classroom seems to be one of the places they feel most human.”

Those points of connection have motivated Nollert to drive multiple times a week from Chapel Hill to Butner, North Carolina, where the correctional institution is located. Nollert recounted a recent class in which they studied disparate poets—Shakespeare and Mary Oliver. They compared how each approached big questions, such as meaning, morality, life, and death.

“What’s valuable about literature is the time that you spend with it,” Nollert said. “If it’s something that occupies you, that time you spend on it is an argument for why it’s valuable—because all we have is time.”

At the correctional institution, Nollert has taught students who have long sentences and may not be released for many years.

“It’s a moment where they can be human,” Nollert said. “Part of what they’re looking for is social fulfillment. … The classroom is a space where that can happen.”

Nollert is also president of Graduate and Professional Student Government, an organization that advocates for, collaborates with, and empowers graduate and professional students at UNC-Chapel Hill. He is an alumnus of Rhodes College.

CATEGORIES Correctional Ed | In the News